The Young Mothers – a mothers work is never done

I thought about writing this review a la the lyrics to Steve Miller’s Take the Money and Run, but I decided I would spare everyone that agony. Maybe at a show…with enough drinks...

The Young Mothers is a group formed in Austin by Ingebrigt Haker Flaten that synthesizes free jazz, electronics, punk, rap and God knows what else in their pursuit of musical mayhem. For the record, I generally hate these kind of groups, because many times the components sound grafted onto each other, or they’re really a rock band that adds some scronky sax with no context in relation to the whole. When Dennis Gonzalez of Yells At Eels told me about this project, I was thinking to myself, “Um, how am I going to tell this nice man that this thing sucks?”

But one listen to a mothers (sic) work is never done and I was a fan. First of all, you’ve got great musicians in the mix: Besides Ingebrigt, there’s Chicago stalwart Frank Rosaly, Stefan Gonzlez from Yells At Eels, and young firebrand Jason Jackson, who sometimes guests with that group. Horne and Taylor are new to me, but they more than hold their own.

Overall, a mothers work is a blast of energy that hits you across the face and doesn’t back down. If that mix of elements mentioned earlier doesn't melt your face off, Haker Flaten includes a dreamscape arrangement of a Benjamin Britten piece, and the album concludes with Ruth, which is based on a traditional Ugandan melody. On Wells, the original, Jackson’s tart, angular alto on top of a No Wave guitar riff reminded me of The Contortions, a pioneer of this approach. In fact, the No Wave scene probably comes closest to summing up what this record sounds like, but that’s really a loose approximation.

Probably the biggest stumbling block for me, given my tastes, is the rapping. I’m very old school when it comes to hip hop; the last album I bought was It Takes a Nation of Millions to Hold Us Back. But Taylor spits (do people still say that?) some tense verses that are generally well-integrated into the proceedings. And the dude can play some trumpet too.

I’ve enjoyed blasting this on my car stereo with the sunroof open. It’s a jolt of energy that gets you going before work, that’s for sure. And it’s a helluva lot of fun.

You can listen to some tracks at Ingebrigt's Bandcamp page.
Posted by Unknown at 10:47 AM No comments: Kartet is a group operating somewhere in the intersection of avant-garde, mainstream and chamber jazz. I was not familiar with them before Grand Laps (French for "a long while"), but as it turns out the group began 25 years ago and this is their sixth album, although it’s been seven years since their previous release.

Even though the line-up is that of a classic jazz quartet, this is not a horn-with-rhythm section album; it’s more egalitarian in design. The music on Grand Laps generally unfolds at an unhurried pace, and the structures the group use emphasize dialog, not blazing displays of virtuosity. At some points I was reminded of Miles’ second quintet in their more introspective moments. There’s an MBase influence lurking as well in the angular nature of some of the compositions.

The most distinctive element of Kartet’s sound is owed to the presence of pianist Benoit Delbecq. His percussive style is immediately recognizable, and goes the furthest to define the group’s identity. Delbecq also shows his impressionistic side, with a wonderful blend of lyrically abstract playing.

Guillaume Orti primarily plays alto, with a tone that’s a little thin in the upper register for my taste, as well as C-Melody and soprano saxes. He gives the music plenty of breathing room, although at times I wanted more direction from him to propel the music forward. Dupont does a nice job of providing support when needed while adding his own commentary. Galland, who replaces original Kartet drummer Chandler Sardjoe, implies the rhythmic structures with his shading, but turns up the intensity when required.

Kartet does a good job of integrating composed and improvised sections so that each flows easily into the other. The music on Grand Laps is challenging to the listener, but has a lyrical, attractive quality that is unexpected. A late night avant-garde album, perhaps?

Here's a video on the making of the album:

KARTET - GRAND LAPS from Igor Juget on Vimeo.
Posted by Unknown at 12:19 PM No comments: 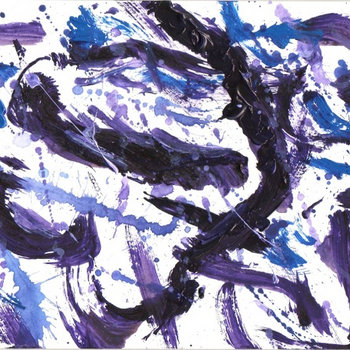 Tim Daisy's Relay Recordings has just released a new composition by trombonist Steve Swell as part of the Relay New Composer series. The piece is scored for four clarinets; the musicians involved are Ned Rothenberg, Guillermo Gregorio, Miguel Malla and Zara Acosta-Chen. If you're a fan of contemporary composition, or a fan of the clarinet, it's definitely worth checking out. The piece is available as a download from Relay Recordings' Bandcamp page.

Posted by Unknown at 8:15 AM No comments: