Silver Cornet was recorded in March of this year at the Windup Space in Baltimore, the last stop on the Quartet’s North American tour. I had the pleasure of attending their Dallas performance a few night’s earlier; Yells At Eels' Dennis Gonzalez had coaxed them up between their Austin and Houston dates.

When I walked in to the concert venue, I saw a man with a cornet in his lap, sitting alone in a corner. Thus, I was able to actually meet Mr. Bradford and soak in his tales of growing up in Fort Worth and the legends he had played with. Later on I was able to meet the other members of the group; definitely a wonderful experience that I documented on this blog.

The instrumental line-up and Bradford’s history would suggest that their music would be heavily influenced by Ornette, but at least as a listener that’s not really the case. In fact, the Quartet really reminds me of Other Dimensions In Music in the way the music rises and falls in a very natural way.

Bradford has what I call an “organic” approach to improvising; everything flows, nothing seems forced, and it’s very conversational. You really hear the history of jazz and free music in his playing.


Listening to Frode is like what I imagine watching Pollock at work was like: At first everything looks random and disconnected, but over the course of time you see an arc, a progression. He infers, rather than states, and he’s a great foil for his front-line partner.

The acoustics of the Dallas show made picking up the bass difficult, so it’s great to hear Ingebrigt’s contributions so much more clearly. He’s all over his instrument, with a lightening-quick approach that reminds me of Barry Guy at times. 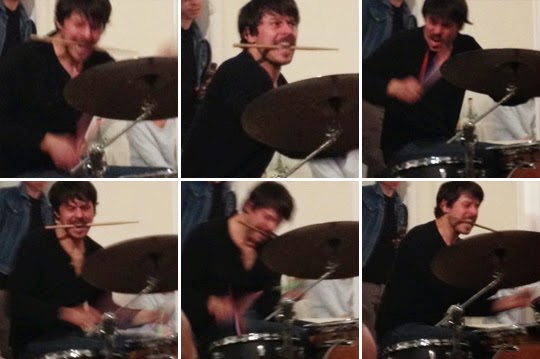 And Frank Rosaly? Well, I’ve never seen anyone play like he does. His approach involves rapidly taking various cymbals off their stands, placing them on top of drumheads, and striking or swiping them. It’s mesmerizing live, and what almost got lost was how well he can drive the band when needed.

Once the Dallas performance was finished, I had a vision in my mind that the music hadn’t really stopped, that it was a river that would keep flowing. Silver Cornet is proof of that.

Here's a clip from this Baltimore performance:

Wadada Leo Smith is undergoing a creative renaissance, with involvement in what seems to be an unprecedented amount of projects over the past few years. Ten Freedom Summers, Occupy The World and the collective that just released the album Red Hill are just a few of the projects that he’s spearheaded or been a part of.

Occupy and several other albums from Mr. Smith have been released by Tum Records of Finland, and now that label gives us The Great Lakes Suite, six compositions by Smith spread over two CDs.

I couldn’t wait to get my hands on this when I learned who was on it, an all-star quartet with Henry Threadgill, John Lindberg and Jack DeJohnette. But beyond the players, it’s the strength of the compositions, particularly the three suites that comprise the first CD, that grabs one’s attention.

The opening Lake Michigan has an unusual and arresting stop-start theme, with a structure that leads to a couple of false endings over its length. Lake Ontario, which follows, makes excellent use of Threadgill’s arid flute. There’s a sense throughout that the musicians are really taking their time to explore each composition, so that the mind doesn’t really record whether the tempos are fast or slow; everything flows in an organic fashion through to the final suite, the music shuffling off like a freighter moving out to the horizon.

Mr. Smith’s trumpet has always had a majestic quality, with a little hint of Miles, and that is still the case here, but now there’s an additional richness, an emotional resonance, that I don’t remember hearing from him before. I was looking forward to hearing Threadgill in a context other than his own groups, and he doesn’t disappoint. His solos seem to be more about juxtaposing interesting textures and building blocks of sound in interaction with the other players, rather than providing strict linear narratives.

It’s a treat to hear Lindberg and DeJohnette, both of whom just kill throughout Suites. I don’t know why we don’t see more of Lindberg, but I’m glad Smith uses him regularly, and DeJohnette is all over his kit, bringing to mind his hyperactive work with Miles during the Fillmore days.

Overall, the first CD is the slightly stronger of the two, mainly due to the aforementioned first two compositions, but that’s a minor quibble. There’s a lot that will keep you coming back to The Great Lakes Suite.

Posted by Unknown at 9:57 AM No comments:

I have to admit its taken me a while to fully warm up to the RED Trio. What I had heard of their previous releases, particularly those with guest artists John Butcher and Nate Wooley, had seemed a little too “pointillist” for my tastes. But I liked what I heard from individual members’ contributions to records such as Clocks & Clouds with Luis Vicente, and now the Trio has released a fabulous recording of a 2013 live concert with vibist Mattias Stahl.

What I’ve come to appreciate about the RED Trio is this great sense of architecture they bring to what they create in the moment. The performance as released consists of three pieces ranging from 16 to 20 minutes each, and it’s fascinating to hear how each develops. One moment the group will be engaged in intense interplay, then turn on a dime to sparse sections with what sounds like prepared piano and percussive interjections from Ferrandini. For a small group, they create an impressive set of textures.

The more intense sections of this performance remind me of The Feel Trio. Pinheiro’s playing has some of Cecil Taylor’s markers, but he’s developed his own vocabulary that contains more use of space and silence than any of Taylor’s work, along with the way he dampens his strings to generate percussive effects. Guest Stahl fits right in with a metallic flavor to his vibes, and sounds like a permanent member of the group.

The RED Trio is known for their democratic interaction, and they don’t disappoint here. As I write this, I realize it’s somewhat useless to single out any one member’s contributions, as one might when listening to a traditional piano trio. Every time I listen to North, and no matter how hard I try to focus on one member at a time, I end up perceiving the totality of the performance. There are a lot of trios that emphasize “leaderless” group interaction, but the RED Trio takes this to another, unique level.

You can now officially count me as a fan. Now to catch up with all their previous output…(sigh)