This is the final installation in my four-part series on new Italian jazz from Stefano Giust’s Setola Di Maiale label. Previous reviews can be found here, here and here.

Tesla Coils is a trio exploring “real-time electronic orchestration.” My experience with records featuring real-time sampling/signal processing is mixed. At times I think it works really well, such as on Evan Parker & his Electro-Acoustic Ensemble’s The Moment’s Energy, and at times it’s used in an overly harsh way, putting a heavy layer on top of the music. Tesla Coils is one of the best examples of this type of digital manipulation that I’ve yet heard. The sampling adds to the dialogue and never seems arbitrary or random.

Valdes has a spikey approach to his guitar that at certain points reminded me of Mary Halvorson, but he also mixes in other tactics including a crunching, metal-influenced component. He’s a good listener too.

When I first encountered this CD my thought was, “Oh yeah Blaise Siwula, I see his name around, I’ve heard him on a couple of things.” At the end of the first track I was thinking, “Wow, I had no idea this guy was such a great soprano sax player!” And as it turns out, he’s not too shabby on alto or tenor either.

Siwula plays his reeds “straight” for the most part, with a full tone on soprano and an at times luxurious, almost Hodges-ian tone on alto. Unlike a lot of these types of records, things never get to the point where you can’t tell who’s playing what, and that’s actually refreshing. The tension between the jazz-influenced saxophone and the edgy contributions from the other two musicians ends up being fertile ground to explore.

This is my sleeper album of the year so far; don’t sleep on it.

Posted by Unknown at 7:55 PM No comments:

(This is the third in a series of reviews spotlighting new releases from the Setola di Maiale label. The previous reviews are here and here.)

Il Tempo Non Passa Invano (Time Fails, or Time in Vain?) is a really nice duet album that begins In a Milesean Way with somber muted trumpet from Mazzon. The duo explores twelve short pieces, mostly under four minutes, some sounding composed and some improvised, with Mazzon on both open and muted horn, using both traditional and extended techniques.

Mazzon’s name didn’t register with me, but he’s a founding member of the Italian Instabile Orchestra and a veteran of the Italian free jazz scene since the 70’s. Del Piano is a monster on electric bass, with tons of technique, but not used for its own sake; he meshes with Mazzon even in the quieter passages.

The mood of the opening track comes back around near the end of the disc in a slightly different way on "Se qualcuno si innamorera di me" (“If someone falls in love with me”), a sorrowful, elegant theme that could only come from the soul of an Italian jazzman. It’s a nice bookend to a rewarding dialogue.
Posted by Unknown at 8:54 PM 3 comments:

This type of record is somewhat uncharted territory for me. Novaga herself describes her music as experimental, rather than as jazz or free improv. However, she does indicate that a large degree of improvisation is involved in the performances.

I wasn’t sure what to expect, and that sense of anticipation, even unease, persists throughout the album. It plays out as a series of textures, or episodes, that somehow hang together to form a narrative. There are passages of minimal gestures and there are passages that seem sinister and alien. A sort of hazy calm sets in by the end of the last track. Novaga gets all manner of sounds out of her electric, from feedback to bell-like percussion to piano-like sounds.

She will be performing the works that comprise this CD in concert at Spectrum in New York City on August 26.

For the next few days, I’m going to turn my attention to new Italian jazz, specifically several new releases from the Setola di Maiale label of drummer Stefano Giust. Solos, duos, trios and a quintet are all represented, along with a variety of approaches from through-composed music to totally free.

First up is a live recording from the 2012 Mibnight Jazz Festival in Bremen, Germany from the trio known as Transition. This is another great release from them, following their self-titled record, which I reviewed previously.

With a lineup of flute, piano and drums, one might expect a pastoral approach, but that’s hardly the case. The trio generates plenty of heat, with the interaction between Guazzaloca and Giust recalling the epic battles of Cecil Taylor and Tony Oxley. Nils Gerold is pushing the boundaries of the flute as an improvising instrument, and he deserves to be mentioned alongside Nicole Mitchell as one of the top flautists in today’s music.

Within the three pieces, which sound completely improvised, the group exhibits great range, “transitioning” if you will from terse exchanges to very dense passages. The live sound is crisp and clear, and with the absence of audience noise, Mibnight sounds very close to a studio recording.

Definitely one to seek out if you’re a fan of free improv or the flute in new music.
Posted by Unknown at 8:50 PM No comments:

Mise en Abîme returns the same personnel as Lehman’s breakout 2009 album Travail, Transformation and Flow. Since then, he’s partnered with Rudresh Mahanthappa for Dual Identity and released an under-appreciated trio album, Dialect Flourescent, on which he radically deconstructed some standards. Mise features a mix of Lehman’s own compositions alongside three Bud Powell tunes and a nod to hip-hop on one track.

The title Mise en Abîme appears to be a play on words combining two concepts, "mise en abyme", a formal technique in which an image contains a smaller copy of itself, appearing to recur infinitely, and “abîme”, the geographical term for a vertical shaft that opens into a network of subterranean passages. The connotation clearly is one of layers spreading in many directions, perhaps a reference to Lehman’s fascination with spectral harmony.

Spectral harmony organizes overtones of different instruments according to their frequencies as opposed to the intervals of a musical scale. Using this technique, along with harmonic movement to different tonal centers, Lehman constructs a shimmering, vibrating sound that incorporates elements of new music, jazz and electronic music.

The combination of Lehman’s ascetic alto, the intricate yet melodic compositions, and the overtones created, particularly by the vibraphone, creates a signature sound. Vibist Chris Dingman plays a key role, prominent in the mix, his dense ringing overtones a continual presence in both solo and ensemble sections.

There’s always been an element of emotional distance in Lehman’s music, but it serves here to create an air of mystery. The combination of the geometric arrangements and ringing vibes create a feeling of suspended animation. The last track, Parisian Thoroughfare Transcription, features Lehman playing over what sounds like samples of distant voice and piano, and comes across as a throwaway compared to what has come before. But it doesn’t distract from the quality of the seven previous tracks.

The fact that Mise is a consolidation of Travail shouldn’t be considered damning with faint praise. It’s a confirmation of Steve Lehman’s talents as conceptualizer and composer, synthesizing influences such as Jackie McLean, Anthony Braxton, spectral composer Tristan Murail, and M-Base. There’s no other group out there that sounds like this.

Posted by Unknown at 5:25 AM No comments:

Jazz lost one of its greatest bassists this past Friday. Mr. Haden was 76, and evidently had been ill for some time. There have already numerous articles, blog posts and forum entries paying tribute to the man, so rather than retell the facts about his career, I wanted to mention a couple of performances that particularly resonated with me when I had just discovered jazz as a teenager.

I think my first exposure to Mr. Haden’s music was his contribution to Ornette Coleman’s Crisis, which was also my introduction to Ornette. For some reason that Impulse LP was still lying around in the bins of my local record store in 1974 when I picked it up. Here’s Haden’s Song for Che from that album:

As great as that record is, Haden really caught my attention with his work of Paul Motian’s Tribute, released in ’74 and still one of my favorite records from ECM’s “classic” period, when the label released gem after gem. Tribute is a great example of Haden’s monster, fat sound and his ability to simultaneously support and drive the music being made. There are parts of this record where he gets as funky as I’ve ever heard him.

Truly one of the very greatest bassists of any period of jazz, his death is a profound loss. Thank you, Mr. Haden, for helping a teenaged kid discover the magic that’s inherent in this music.
Posted by Unknown at 4:55 PM No comments: On Clocks and Clouds, Portuguese trumpeter Luis Vicente is joined by two-thirds of the RED Trio, pianist Rodrigo Pinheiro and bassist Hernani Faustino. Marco Franco, who started out drumming in metal bands, takes the place of Gabriel Ferrandini. 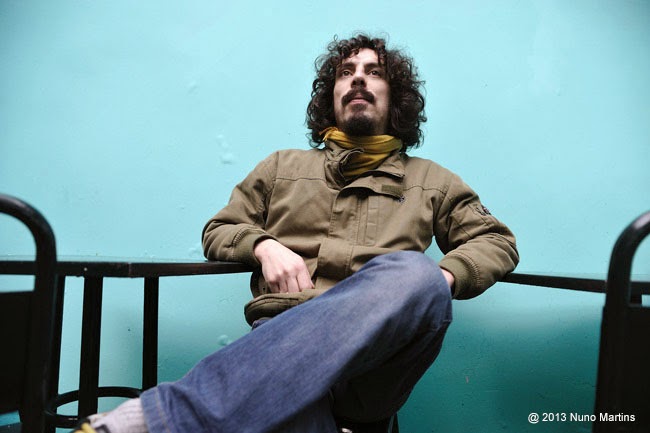 Clocks and Clouds refers to Ligeti’s composition of the same name, which itself was a reference to philosopher Karl Raimund Popper’s essay “On Clocks and Clouds.” Popper wrote of natural processes that can be measured exactly (“Clocks”) and those that are indefinite and can only be described in approximation (“Clouds”).

Based on my limited experience with the RED Trio’s music, I thought Clocks and Clouds was going to be a minimal, lower-case affair. Boy was I wrong, but gladly so, because this is a free improv record that has some muscle.

Vincente does a nice job expressing himself through both traditional and extended techniques, with the open horn and with a mute. Pinheiro sounds like two piano players at times, exploring the extremes of both the lower and upper registers of his instrument. The RED Trio is a group that’s never really clicked for me for some reason, but with Franco in the driver’s seat things really take flight. The whole group engages in lightening quick reactions to each other, and sounds animated and more assertive than I expected. Now I need to go back and reassess RED Trio’s catalog, especially their recording with Nate Wooley, Stem.

Based on Popper’s definitions, Clocks and Clouds is probably more “Clouds”, an indefinite, in-the-moment process, but the structures the group creates in the moment work. If you’re looking for free improv that’s not afraid to get boisterous at the proper times, Clouds and Clouds is for you.

Posted by Unknown at 1:22 PM No comments:

Catching Up With Brandon Evans 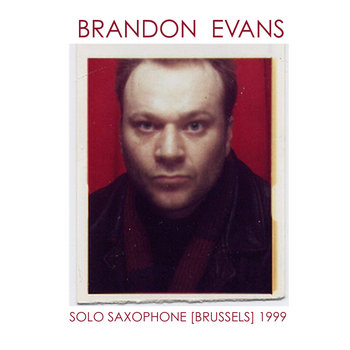 Saxophonist and composer Brandon Evans is probably best known for his work with Anthony Braxton beginning in the 90’s. Braxton’s Small Ensemble Music (Wesleyan) 1994 is the first album I’m aware of on which his name appears, and he’s also on the four volumes of Ninetet (Yoshi’s) 1997.

Evans also collaborated with Sonny Simmons on several albums issued on Evans’ Parallactic Records label. He produced and directed a documentary in 2003 about Simmons called The Multiple Rated X Truth.

Evans seemed to drop out of site for several years, and releases on his label became highly sought after by collectors, such as the excellent 3 CDr set of duets with Anthony Braxton, Elliptical Axis 15. 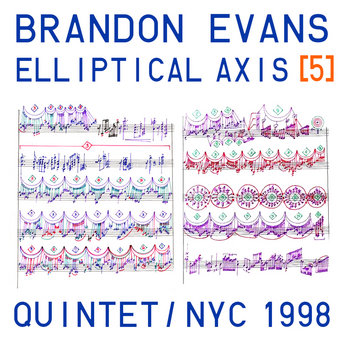 In recent months, however, Evans has uploaded all the Parallactic releases to his Bandcamp page. And now, there’s even better news: All of these albums are available for download for free, or “name your price”, during the month of July. One of these is a new release entitled Harbors.

I encourage everyone to download one or more of Evans’ albums; I think you’ll be pleased by what you hear.
Posted by Unknown at 8:41 PM No comments: