Here's a video of the Radiohead song Airbag performed by the Julio Resende Trio, with photos by Ann LT:

The (Real) Art of The Trio 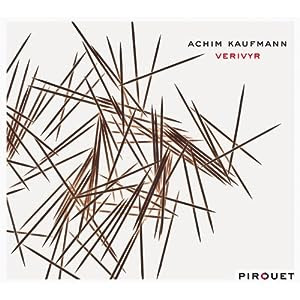 Achim Kaufmann should be considered in the top rank of jazz pianists, but his albums don't seem to get as much attention as they deserve. I first became aware of him with the release of Double Exposure (Leo) with Michael Moore and John Hollenbeck, and his album Starmelodics (Nuscope) with Mark Dresser and Harris Eisenstadt is a little gem.

Verivyr got a 5 star review on Stef's blog, and it's hard to quibble with the rating. It has the perfect blend of abstraction and beautifully melodic playing that is unique to Kaufmann.

Jim Black has been a great engine for Satoko Fujii's trio, and he's equally magnificent here, giving just the right amount of coloration and drive. I wasn't familiar with Valdi Kolli, but he proves to be an adept partner, interacting as an equal.

Julio Resende Trio, You Taste Like A Song
Clean Feed

This record caught me off guard; it's tender and lyrical and touching without lapsing into sentimentality. It has relatively straightforward melodies, rhythms, harmonies - everything I usually hate! But You Taste Like A Song really moved me.

It’s almost become a cliché for jazz pianists to include a Radiohead song, and I rolled my eyes when I saw Resende had done the same. But he takes Airbag, a song I’m not familiar with, and crafts a beautiful reverie. Later in the set he tackles a John Mayer tune with equally good results.

Song is lyrical but not easy listening. Resende throws in some curveballs to keep it interesting, like playing inside the piano or chopping up the rhythms when he improvises

Listening to this reminded me of those times when you were a kid lying on the side of a hill, looking up at the clouds going by, trying to grasp the universe and your place in it. It's a beautiful listening experience.
Posted by Unknown at 9:16 AM No comments: