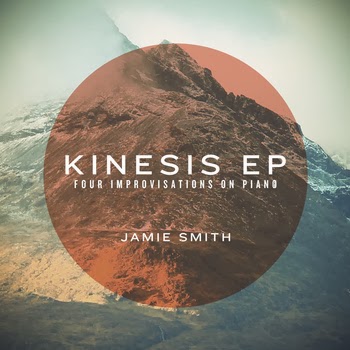 Jamie Alexander Smith is a Scottish pianist who has a new EP out of solo piano, four tracks running a total of about 15 minutes.

Smith cites Keith Jarrett as an influence, and there are echoes of Jarrett in the way he combines classical and gospel forms. But it would be unfair to stop there, as Smith has clearly absorbed a lot of modern jazz and classical music. There are a wide range of approaches at work here, and Smith integrates them well, with good technique and a lot of independence between the hands. There are a couple of spots that seem a little too stylized and lacking in depth, but overall it's well put together.

I was pretty shocked to find out he's previously put out some Acid Jazz tracks, not only because the music on Kinesis is so different, but because I didn’t know people still made Acid Jazz music! In any case, this is a strictly acoustic, more avant affair.

Kinesis sounds as if much of the material is through-composed, but the release notes state that it is "four freely improvised tracks on piano". If that’s the case, he's got a nice sense of structure, as each piece is tight and the EP never lacks momentum.

Kinesis makes me want to hear more, which is a good sign. It’s available for not much money at the artist’s Bandcamp site.
Posted by Unknown at 8:47 AM No comments:

I was excited to read on Facebook that Ingrid Laubrock and Tom Rainey are touring in support of their new CD And Other Desert Towns on Relative Pitch. Here are the dates, some of which are still tentative:

I first came across David Haney's name when he took over publication of Cadence Magazine a few years ago. I found out he was a pianist and checked out his Conspiracy a Go Go on CIMP (2008) with Dominic Duval and Andrew Cyrille. I liked what I heard, even though at times he sounded almost overwhelmed by the maelstrom the bassist and drummer were whipping up, and I wanted to hear more.

The Jackstraw of the title refers to Jackstraw Studios in Seattle, where these two sessions were recorded eight years apart. The first three tracks from 2000 feature the trio of Haney, Priester and Neidlinger, while the second three from 2008 feature the sextet.

The trio cuts showcase a nice contrast between Priester's silky smooth trombone and Haney's spiky piano. Haney has that link to Ellington / Monk / Nichols that I love with some avant garde classical influences in the mix as well. Neidlinger comes to the fore on Lightening Tooth and Thunder Foot, a collectively improvised piece and the only track not wholly composed by Haney. I'm always impressed every time I hear Neidlinger, and I wonder why he hasn't recorded more. One or more of the three musicians always does something to keep the music moving forward during these three selections; it's a pleasure to hear these seasoned masters creating on the spot.

On Elephant of Surprise, the first of the sextet tracks, Carletti establishes a tribal beat for the rest of the group to improvise over. Blues Eventually has a nice blend of composition and group improvisation which characterizes the entire album. Haning's contra alto clarinet, which sounds like a bass clarinet, adds a nice flavor to the group sound. The final track, Possession of Foxes, begins on a frenetic note, and then deconstructs into commentary from the horns with interjections from percussion and prepared piano.

My only issue with this album is that, while the CD runs 56 minutes, I wanted to hear more of each group. You can purchase the CD through Downtown Music Gallery or Slam’s website.

Posted by Unknown at 7:21 PM No comments: