Here’s one that’s a little outside of my usual listening habits. Oliva and Costa have recorded a continuous 26+ minute track “next to a small lake in Luminasio (Marzabotto, Bologna, Italy).” There are definite elements of a field recording present in the soothing sounds captured in nature, and the two musicians have added vocals and percussion in real time without overdubs. As suggested by the locale, FROGS proceeds in a generally placid, meditative nature until Ms. Oliva adds intensity with her wordless vocal effects. 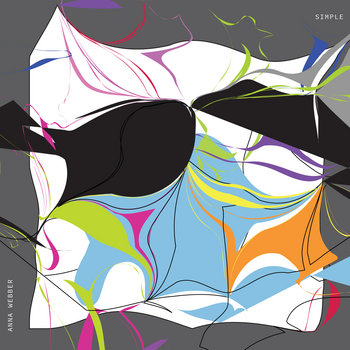 SIMPLE is at once an apt and a misleading title for this CD. Saxophonist/flautist Webber, a new name to me, has attracted a couple of A-listers in Mitchell and Hollenbeck for her project, and upon listening it’s easy to see why they wanted to be on board – there’s a lot to sink your teeth into.

Ms. Webber uses only the three instruments to fulfill her compositional vision over the seven tracks of the album. However, she deploys an impressive variety of approaches to the material, from quieter minimalist passages to themes stated in unison to knotty full-bore free improv.

Using only woodwinds, piano and drums creates a lot of open space in the music, and Webber plays in and around the compositions, suggesting they could unspool infinitely. Her tone on tenor is malleable, bending and stretching notes in a way that calls to mind the spirit, if not the exact style, of a young David Murray.

Shifting effortlessly and seamlessly from composed to improvised sections, intricate is the word that best sums up her approach, and if that seems to be contrary to the title of the album, somehow it all fits. She makes the complex simple, which as we all know is harder than making the simple complex.

As soon as SIMPLE had finished, I started over and immediately listened to it again. Now that’s the sign of a good record!

Posted by Unknown at 7:51 AM No comments:

Sometimes it takes a set of circumstances to make an album click. Driving home from work in the early evening after an exhausting week, I put on In Convergence Liberation and let it take me where it wanted to go.

Something about the solemn melody of the opening track, La Angustia de Los Amantes (“Lover’s Agony”) and Mili Bermejo’s soulful rendition in Spanish of a 13th century Persian poem made a connection with me, speaking some truths about life’s struggles, breaking through barriers of culture and language. It transported me out of that specific time and place, and gave me a perspective beyond my immediate concerns. I suppose that’s one of the main reasons we listen to music.

With In Convergence Liberation, Hafez Modirzadeh has accomplished an extremely skillful blending of jazz, avant-garde classical, and Persian as well as Iberian music. The record proved somewhat difficult to wrap my head around, and write about, because with its diversity of approaches and instrumentation, along with its length over 18 tracks, Liberation at first sounds like two or even three different albums.

It was when I began focusing on the strings that I realized that they serve as the unifying thread throughout the record. Far from a “reeds with stings” date, the writing for the ETHEL string quartet is complex and deftly woven into each piece. In fact, the 4-part Suite Compost solely featuring the quartet is one of the highlights of the entire album.

In addition to the strings, Modirzadeh blends his reeds, the trumpet of Amir ElSaffar, Ms. Bermejo’s voice, and traditional Persian instruments such as the tonbak (goblet drum) and daf (frame drum) into a unified whole. Certain tracks, such as the aforementioned La Angustia bring more of the Persian musical influence, and others, such as Number That Moves featuring Modirzadeh’s plaintive alto, will remind one of Ornette Coleman.

Even with all I’ve described, I’ve barely scratched the surface of Hafez Modirzadeh’s musical world, which also includes gamelan music, motifs from Beethoven and string quartet music from Mozart to Bartok. Through all these connections, Modirzaheh makes connections with life, with the beauty in art and with the human experience that connects us all.

Here's a performance of Number That Moves, excerpted from a July, 2011 performance in San Francisco with ETHEL and Amir Abbas Etemadzadeh:

Posted by Unknown at 8:51 AM No comments:

Damon Smith is a bassist who in recent years has migrated from Northern California to Houston. He runs the Balance Point Acoustics label, which has several releases with a mix of American and European musicians.

From-To-From brings together three talents from the Houston area with 78-year-old drumming legend Alvin Fielder. The six tracks appear to be all freely improvised, ranging from a 3 minute blowout to an episodic 20+ minute piece.

Unlike some free improv albums, this record is not just about textures, and the frontline of trombonist David Dove and saxophonist Jason Jackson aren’t afraid to mix it up in extended periods of interaction. What is unexpected are those quieter sections where the horn players engage in some West Coast cool school counterpoint, Jackson waxing lyrically on his alto.

Smith provides a framework for the other musicians, and reminds me a little of Barry Guy in that he will let fly with some rapid phrases, and then recede into a supporting role. Fielder, for all his avant-garde credentials, has a solid foundation in all forms of jazz, so it’s refreshing to hear him create a nice gangly free-bop groove at different points, with the horns taking advantage, diving in and out of the waves of rhythm he creates.

David Dove, head of Houston’s Nameless Sound organization, acquits himself well on trombone, with a garrulous sound somewhat reminiscent of Steve Swell. Jackson’s star is seemingly on the rise, as he is now a member of Ingebrigt Haker Flaten’s Young Mothers and has made guest appearances with Dennis Gonzalez’s Yells At Eels.

The Texas jazz scene is the richer for Damon Smith’s presence, and here’s hoping it leads to more concerts and more albums.

Posted by Unknown at 8:36 AM No comments: