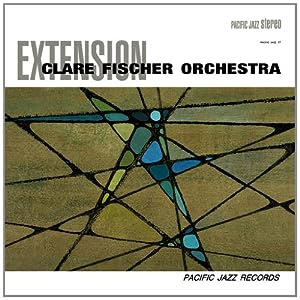 This reissue of the 1963 big band date by Fischer, who died in January of this year, has been the topic of considerable conversation on the Organissimo forums. It's been lovingly remastered and released by Jonathan Horowitz of International Phonograph, the same label that has reissued Julius Hemphill's Dogon A.D. and Bill Dixon's Intents and Purposes. The debate has centered on whether this is a work of arranging and composing genius, or simply a well-crafted effort in line with other recordings of that period. I've listened to Extension about 4 times now, and I agree with the person who posted on Organissimo that it rewards patient listening. It sounded pretty "loungy" the first time through, partly because of the organ, which is probably my least favorite instrument. But repeated listenings reveals depth to the arrangements and some interesting voicings. I hear echoes of Gil Evans, but Fischer had his own style, based on this one piece of evidence. It's also interesting because the music draws me in, but I feel an emotional distance from it, some sense of remove. I think aspects of the recording, especially the closing "Canto Africano", mark it as a period piece. And I take points off for the organ. But overall, I like it and I'm glad I bought it.
Posted by Unknown at 8:58 PM